Were you looking for Koreaqwer?

Qwer was a fake South Korean "player" in Geometry Dash who became a sensation within the community. He was talked about a lot around July 2016 for beating numerous demons swiftly, with low attempt counts. Qwer was revealed to be a joke group of multiple players a month later.

"Qwer group" is also a term for a group of players anonymously playing under one single account, either to deceive or prank others. The term became a thing as a follow up of the event.

The idea of qwer was first brought up in a Discord call where Wabbit was talking to Mefewe, Byakuran, and Gigas. He came up with the idea of a joke account where a hypothetical player would beat Sonic Wave before Mefewe, and reveal qwer's identity later on. They did this just to have fun and shake the community a bit; a social experiment, as they claimed.

Months later, the project was starting to take shape. They invited Quasar, Nikro, and Waboosher to the group, and everyone was given specific tasks - Wabbit was the leader and creator, Byakuran was the GFX creator, Gigas was the one who managed the social media account, communicating in Korean to keep qwer's identity more concealed and authentic. Nikro was the one building, Waboosher completed levels like Cataclysm, Quasar was tasked to beat The Hell Factory (which was canceled), and Mefewe was tasked to beat Sonic Wave.

Later on, Mefewe had revealed the group to Aurorus, allegedly for being frustrated of the members not paying attention to him. They were not happy with it, but decided to forget about it. Wabbit, later on, told about qwer to Cyclic.

They wanted to get Trusta to beat Sakupen Hell, but was declined. They did, however, get RpgRaketti to join and beat Bloodbath using the Michigun route, in hopes of getting to join GeoStorm, further expanding qwer. Aurorus eventually joined the group as he offered to beat demons like Necropolis.

Sometime later, Mefewe unexpectedly left the group and blocked everyone there. He was already deciding whether or not to leave the group, regardless of its success. While it seemed as if the project failed due to no one being able to beat Sonic Wave, Aurorus decided to beat the level by himself. They also got MaleVeronica to join as they needed someone to beat Betrayal of Fate, which he did.

Everything started to go downhill when MaleVeronica revealed the whole qwer situation to Surv, causing a flame-war in the chat, where everyone was against MaleVeronica. They allowed Surv into the group, and Surv talked about how he isn't against the project or the players involved, but was upset towards Aurorus. As Surv left, Aurorus started to have negative impressions towards Male, claiming that he ruined his friendship with Surv. He also wasn't happy with Surv either; he vowed to complete Yatagarasu before him. Aurorus had repeatedly threathened to sabotage the group if they don't fulfill what he wanted. Other than that, Aurorus and MaleVeronica argued in the chat for three days straight, which ended up with Aurorus revealing the qwer situation to the public, practically ending the entire qwer project.

As previously mentioned, qwer became a sensation around July 2016 for swift completion of demons. This strikes up conversations about how qwer suddenly emerged from nowhere, and whether or not he's a legitimate player. A bit later, people were starting to accept him as the new best player for his remarkable feats, as well as a good creator (as Nikro built a preview of a level for the qwer account). His video of him completing the 28% to 100% in Sonic Wave also gave hope to the community at the time for an actual victor of the level.

However, people were puzzled when qwer unexpectedly quit around early August 2016, stating that the game was not fun anymore. People were disappointed for his departure. In reality, this was the time when the whole qwer project was starting to fall apart. When Aurorus spread the truth, people were acknowledging it and the whole community began to realize the truth as well - qwer was not an actual player.

Aurorus, the person who revealed the truth, attempted to provide reasoning by saying that the reveal was a cover-up for qwer, who he claimed to be an actual person bullied by the community. Around the same time, however, qwer uploaded a video of Sakupen Hell. People were quick to discover that the gameplay was similar to MaleVeronica's in terms of wave movements and video quality, making people to quickly disregard the response Aurorus gave.

On August 15, 2016, byakuran, one of the four founders of qwer revealed the full story to the public, on GDForum.[1] A lot were left disappointed no less, but others liked the prank.

The editors of the Official Demon list had created a new rule for the list as a follow up to the debacle, and was once called the "qwer account" rule - being in a group which people beat levels for the same account/channel will have all the records of the players involved removed temporarily. Consecutively, everyone who was involved in the qwer project was banned from the list for a month. 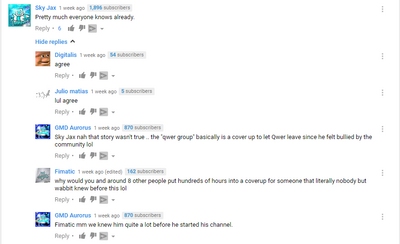 Aurorus attempting to convince people that qwer is an actual person.
Add a photo to this gallery

Retrieved from "https://geometry-dash-fan.fandom.com/wiki/Qwer?oldid=160924"
Community content is available under CC-BY-SA unless otherwise noted.